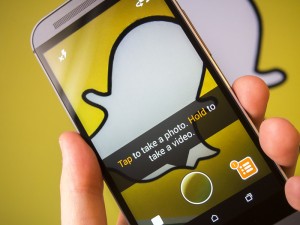 Hello everyone! Thanks for checking back again for part 2 of my social media blog posts. Today, I want to draw your attention to Snapchat. Snapchat has been around for several years now, and has continued to evolve itself and add new features that continually attract users. So, what do I use Snapchat for? Mostly for sending pictures of my dog making sad faces to my partner while he is at work, or honestly, to satisfy my nosey personality by watching videos that other people post to their storyline.

This past year, I have begun to notice more and more business, celebrities, brands, and YouTubers that are using Snapchat to promote their products or services. You can see photos of their day-to-day activities, videos that tour their offices or factories, and sometimes almost trailer like shots advertising a new video or product launch. You can see snaps submitted by people from your local area, or from people who are attending a special event like the World Cup. A few days ago there were snaps from Election Day here in the States.

So where can museums fit into Snapchat? I found an article that is practically ancient now from 2014 that was praising the LACMA Snapchat as genius for making their art into memes. (I will admit, it is funny. I always appreciate a museum that has a good sense of humor.) But other than the museums mentioned in the article, almost two years later I can find no other museums that are advertising their use of Snapchat. I also found a few blog posts that made shallow exclamations like, “Museums should use Snapchat because it is a great way to reach out!” How obvious.

But are our museums being overloaded with social media? I have heard more than once that using exclusively youth oriented platforms has had little results, so do the young demographics of Snapchat scare museums off? Or perhaps it is the task of trying to establish a following. Snapchat is not what I would call ‘browsing friendly’, meaning that people would have to find an accounts username elsewhere, then search for it on the Snapchat app. Perhaps all of this is a bit daunting for museums. This topic leads off on the topic of teens being left out of museums, which is a tangent for another day.

I was just reading (sorry, I do not remember where, you know how the internet it) that Snapchat has been scientifically proven to on average make people happier than other social media competitors. Viewing Snapchat results in more happiness than Facebook, Twitter, or Instagram. Interesting! I found another article that explained that the idea of Snapchat is not really that revolutionary, but rather a new form of temporary conversation. You cannot replay a conversation you have on the phone, similar to the picture on Snapchat disappearing after a few seconds. This contrasts sharply with being able to reread a text or an email. The article also mentions that using media like Snapchat should be easier for small businesses, because it is easier for them to gain trust from followers… this actually contradicts my previous point of smaller museums struggling to build a follower base…

So why do people like Snapchat? Besides the potential risqué aspects, I will say that it is because Snapchat is remarkably human. It shows people, and what they are doing, both the good and the not so good. It may not have all of the features that other social media platforms have, but I think its beauty is in its simplicity. Businesses may be using it as their latest marketing strategy, but it still shows people, what they are doing, and what they are saying. Yesterday, the LACMA showed the opening event of their new clothing store in the museum, with people browsing. There is also a beauty in its temporality- you view something and then it is gone, and we move on. There really is no dwelling or obsessing.

Now that I am getting down to the end here, how do I think museums should use Snapchat? Personally, I want to see what people are up to! That is what I want to see from my friends, so why not museums? I want to see new things, funny things, and works in progress. So please, show me your perfectly organized storage room (we will just pretend that these exist for a moment), or the installation of the latest traveling exhibition. Put a funny caption on an old painting, or tell me about the latest acquisition. We have what, second seconds to make a strong first impression? Well, every photo on Snapchat can be viewed for up to ten seconds. That’s more than enough time.